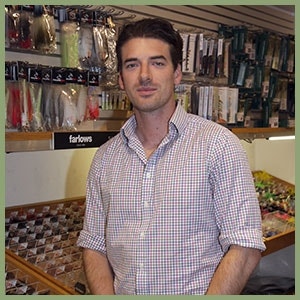 Jonathon joined Farlows in 2017 from a background in mountain sports retailing and has relished the opportunity to get back to his passion for angling.

Jonathon grew up fishing the River Shin in Scotland's Kyle of Sutherland and landed his first salmon from the river at the age of ten. Salmon fishing remains Jonathan?s first love and he is a regular visitor to the rivers Tay, Spey and Helmsdale.

In addition to fishing all over Scotland Jonathan has also fished for Atlantic salmon in Newfoundland and he enjoys trout fishing, particularly on lochs and large reservioirs. More recently he has discovered the delights of London?s River Wandle, from where he has caught trout, chub and dace on the fly.

Together with Farlows Assistant Retail Manager, Tom Clinton, Jonathon creates high quality film footage of their fly fishing adventures (view video below) and we are looking forward to creating a series of Farlows fishing adventures with both of them in due course.

Away from fishing, Jonathon is a trained actor and has makes occasional appearances on stage and screen across the world, including The Globe and London West End locations. His ambition, however, is less on silver screen stardom and more to catch a 30lb Scottish salmon (his best is currently 27). He is also looking forward to discovering the thrill of saltwater fly fishing.