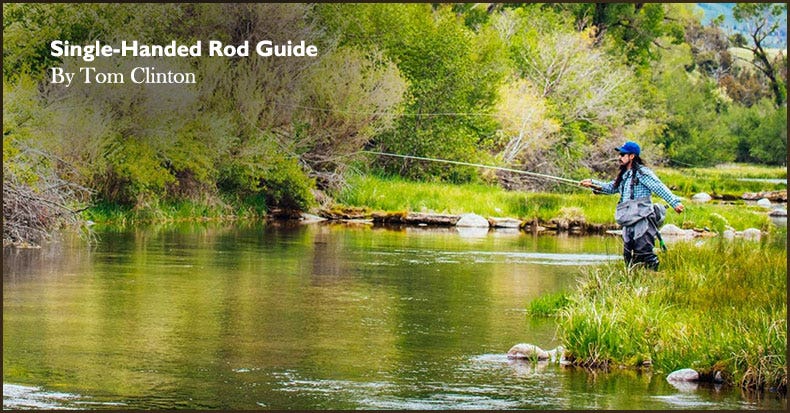 Before we dive into the nitty-gritty of single-handed fly rod selection for freshwater applications, let’s first discuss their fundamental functions.

Ultimately, a fly rod should be capable of doing three things:

A fly rod will allow the user to cast their fly line and terminal tackle with differing levels of power and accuracy. Through experience, the right rod in the right hands will allow for delicate presentation of light tippets and tiny flies at one end of the scale and distance presentation of heavier flies or multi-fly rigs at the other.

Once the cast has been made, certain situations will call for various forms of line management. As a general rule, a longer fly rod will allow for more line control, allowing the angler to work their fly to suit the situation.

Striking and playing a fish

Once the fly is in the right place, and a fish has taken it, the rod is essential to set the hook and to play and land the fish. It therefore needs to be strong and flexible enough to bend without snapping.

Now that we’ve established the general purposes of a fly rod, let’s get stuck into the selection process.  We have aimed to keep this guide as simple as possible so that it doesn’t become too daunting for a total beginner. The vast world of fly rods can be an overwhelming place so, to help reduce confusion, we will cover the following aspects:

What Do You Want to Catch and Where?

It is time to be honest with yourself, really think about where you plan to fish with your new rod and what you’re likely to catch when you get to the bank, or into the boat.  It can be infuriating and disheartening if you get to a new spot and realise that the rod you’ve got with you is inappropriate.

Think of it like a set of golf clubs; you don’t have one club to cover all the shots you’ll take on a course, so you can’t expect one fly rod to cover everything from large reservoirs to small brooks.

Of course there are some particularly versatile fly rods on the market, but this is where knowing your intended venue and target species really helps.

The action of a fly rod is a term bandied about like mad and used by marketing teams to sell rods and it is often mistaken or misunderstood by consumers, guides and even some experts!  In reality it is a very simple concept, the action of a fly rod refers to how quickly it reverts to straight having been flexed. Hence the main three actions are fast, medium and slow and this is why you often see customers and sales advisors doing the ‘fly shop wiggle’ when checking out new rods.

As a general rule, the faster the action of a rod, the more experience it requires to get the most out of it. That isn’t to say a complete beginner won’t be able to cast a fast-action rod, but it will be harder to manage at first.

So, which action suits you best?

Pros: They are great for casting increased distances and brilliant for cutting through wind on those blustery days. It could also be argued that a fast action fly rod is less physically demanding due to its inherent power. You have to put less effort in to reach the same distance as you would with a slower action rod.

Cons: They are more difficult for beginners to handle as the cast’s timings have to be much more precise and they aren’t ideal for close range fishing where accuracy and delicacy are paramount. A faster rod will often accelerate a cast down into the water, easily spooking a fish that might otherwise have taken the fly.

Pros: These are fantastic all-rounders. Great for beginners who want to get to grips with fly casting and enjoy themselves while doing so. They’ll cast a wide range of flies and lines while still maintaining feel. If you plan on only owning one or two fly rods then a versatile rod with a medium action would be a sensible choice.

Cons: In situations that require the utmost distance, or the utmost delicacy, they can fall by the wayside. Think of a medium-action fly rod as a jack-of-all-trades.

Pros: Slow action rods are easier to cast accurately and delicately in close-quarter situations. Like a medium action fly rod, a slow action rod is great for a beginner as they are easy to cast (but it is worth noting they lack the versatility of the medium action).  If you plan to fish smaller brooks, creeks or streams then you may benefit from a rod with a slower action rod too, as fighting small fish on softer rods is a lot more fun.

Cons: It’s very difficult to achieve increased casting distance with a slow-action rod. They also struggle to cast heavier flies or teams of flies, as the rod cannot generate the line speed to carry a heavier cargo.

NB: Action and flex are often confused in the world of fly rods.  Where the action refers to the speed with which the rod returns to straight,  flex refers to how far down the blank the rod flexes from the tip when casting. To add to the confusion, one tends to find specific types of flex combined with certain actions. For example, it is fair to say that most fast action rods have a tip-flex, most medium action rods have a mid-flex and most slow-action rods have a through-flex (i.e. the rod will bend significantly further down the blank than others). That is a general overview though - it is possible to find a fast-action rod with a mid-flex, as well as many other combinations.

There are many different lengths of single-handed fly rod available on the market today. To keep things simple, I’ll narrow them down into rough categories in the table below, but do note there are some niche rods out there which will inevitably fall outside of these guidelines.

As a rule of thumb the longer the rod, the further one can cast and the more control one will have over the fly line once it’s in/on the water. Those who fish larger stillwaters generally prefer a 10’ rod so that they can cast teams of flies further, and with less likelihood of getting into tangles. Shorter rods will afford the user a greater degree of accuracy at close quarters , while allowing them to navigate undergrowth and various bankside obstructions more effectively.

While rods are still produced in traditional ways using older materials such as fibreglass and bamboo (split cane), the most common material on the market today is carbon fibre/graphite.

Bamboo and glass rods offer the user quite a bit more feel and presentation for light dry fly fishing but they aren’t nearly as versatile as a carbon rod due to their inherently slower actions. Carbon rods are quite a bit lighter than both of the alternatives and generally offer a much faster action, making them more suitable for casting further, with varying sizes of flies and reducing fatigue over a long day. If you’re a beginner and want to invest in a rod to cover multiple scenarios, then carbon is the way to go.

There are three main styles of cork handle available on the market today, each of which is suited to a different style of rod. There are varying grades of cork from which the handle can be made as well (ranging from cheap-and-cheerful composite, to top-of-the-line ‘Flor grade’).  It is worth noting that some companies are now producing handles from EVA foam and carbon fibre, though these are rarely found on freshwater fly rods (unless in the pike/predator market). The three styles of handle are as follows:

Cigar: Found on the shortest, lightest freshwater rods and often on those made from bamboo. These usually have a sliding band reel seat that uses the friction of the reel’s foot and the cork to hold the fly reel in place.

Half wells: Found on rods up to 10’ long, but rarely on rods with a line rating higher than #6. These are usually accompanied by a screw-locking reel seat and therefore bridge the gap between lightness and security. Often, they will feature a wooden spacer insert in the reel-seat which reduces weight, increases durability and looks appealing.

Full wells: Found most commonly on longer rods and/or those with higher line ratings. The Full Wells is usually used on rods of 9’ or longer and rarely on those with a line rating lower than #6. Some brands will make exceptions; Sage for example, who use very thin full wells grips on many of their newer light-line rods.

The guides on fly rods are less complex. Beginning at the handle end, each fly rod will have at least one ‘stripper’ guide, often two on heavier line-rating rods. Stripper guides are the widest ones, mostly lined with plastic, ceramic or naturally-occurring minerals like agate.

Further up the rod there are two kinds of guides that are used, either traditional ‘snake’ guides or ‘single–leg’ guides. Snake guides are lighter and generally smaller, single-leg guides have the advantage of keeping wet fly line away from the rod blank, thus reducing friction/surface tension. Tip guides tend not to vary too much in shape, but increase in size as the rod’s line-rating increases.

Of course, this is a very general guide to fly rods, designed to help those that are less familiar with the options, and/or the reasoning behind them, to refine their decisions. It’s something of a rabbit hole when you start to delve deeper into all the variations, so I would highly recommend giving us a call on +44 (0)207 484 1000, emailing us or popping into the store if you have any specific questions.