The Malloch Trophy is awarded annually to the captor of the best salmon caught in Scotland on a fly and safely returned to the water, with its main aim to promote the conservation of salmon through catch and release on Scottish rivers.

Recognising the importance of this trophy, both to anglers and indeed to the conservation of salmon in Scottish rivers. Farlows has created a new trophy to be awarded annually to the captor of the largest fly-caught salmon safely released in an English or Welsh river. 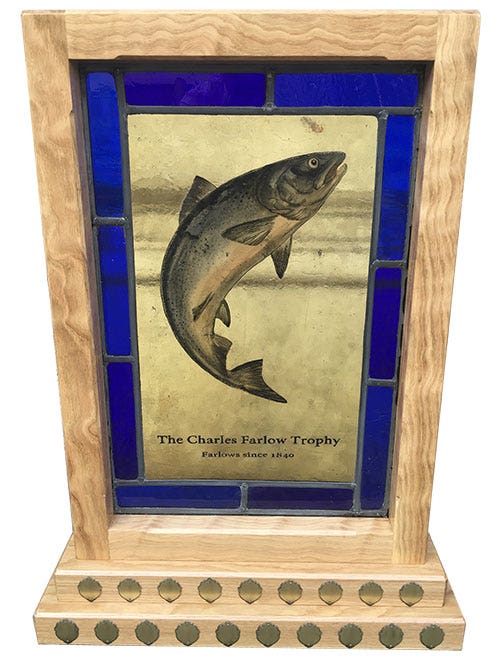 Named after Charles Farlow who, together with his brother John King Farlow, established Farlows in 1840 the trophy is a specially commissioned stained glass panel of an Atlantic salmon, created especially for the competition by renowned stained glass artist Sophie D’Souza.

The stained glass panel will remain on permanent display at Farlows iconic Pall Mall store, with the name of the captor, the weight of the fish and the river from which it was caught engraved upon the base. The annual winner will also receive a certificate, a £500 Farlows gift voucher and a uniquely engraved ‘Goliath’ bottle of gin from Foxdenton Estate.

So where do you have the best chance of catching a salmon that might be a contender for the trophy? Previous winning fish have come from the Wye and the Tyne, but there are plenty of other rivers that have the potential to produce a big fish too, such as the Wear, Eden, Ure, Towy and Teifi, as well as southern English rivers like the Avon, Test and Itchen.


To be considered for the trophy a fish must be:

A full list of rules and an entry form may be found further down the page, and the annual winner will be decided by the decision of the independent Charles Farlow Trophy Committee.

Please submit your entry below:

Find Out More In Our Introduction Video

Join Jonny Muir in-store at Farlows and discover how you can win one of the most prestigious awards in the sport, the Charles Farlow Trophy.


Sophie completed a Post Graduate Certificate in Stained Glass at Central Saint Martins and was awarded a Queen Elizabeth Scholarship in 2010. During the course of her work Sophie has met Her Majesty the Queen and in 2013 she exhibited at Buckingham Palace as part of the Queen's Coronation Festival.

Although Sophie primarily creates ecclesiastical stained glass and undertakes church commissions, Farlows recognised her unique talent and engaged with her to produce a limited range of stained glass panels depicting some of our iconic sporting species.

The establishment of the Charles Farlow Trophy is an ideal opportunity to Farlows to work with Sophie again, and to commission a lasting legacy to the Atlantic salmon and indeed the fishermen who cast their flies to them.


Foxdenton Estate are a small, family run business that specialises in the production of fine English gin and gin liqueurs.

The Estate was acquired by the Radclyffe family through marriage in 1367 and the grandson of the first owner was Knighted at the Battle of Agincourt in 1415. The family has been associated with country sports since the early 1800s and have been making fruit liqueurs at home, like nearly everyone else who is keen on field sports, concentrating on the old recipes and making what they love to drink themselves.

Their special ‘Goliath’ bottle holds 4.5 litres of either London, sloe, damson, raspberry or plum gin and will be specially engraved for the winner of the Charles Farlow Trophy.