Having been stuck on Tayside since before the nationwide coronavirus lockdown I, along with other Scottish anglers, was frustrated to hear that we had to wait a few weeks longer than residents south of the border before we could get out and wet a line. Anticipation had been building for weeks as I paced the banks of the nearby River Tay and saw the occasional bright silver salmon running up through its pools.

I took this time to observe and try to learn more about my home water. So often my visits to the river are with a rod in my hand with the set mission of catching a fish, and I thought perhaps by walking the banks with a clear head I would gain a little knowledge to help me in the future, as well as a great way to safely perform my ‘permitted daily exercise’. I learned a lot about the fly life in the river, stopping to turn over rocks to investigate their residents - a hell of a lot more stonefly than I had previously thought, along with plenty of caddis, gammarus shrimp, olives and all sorts of other creatures. 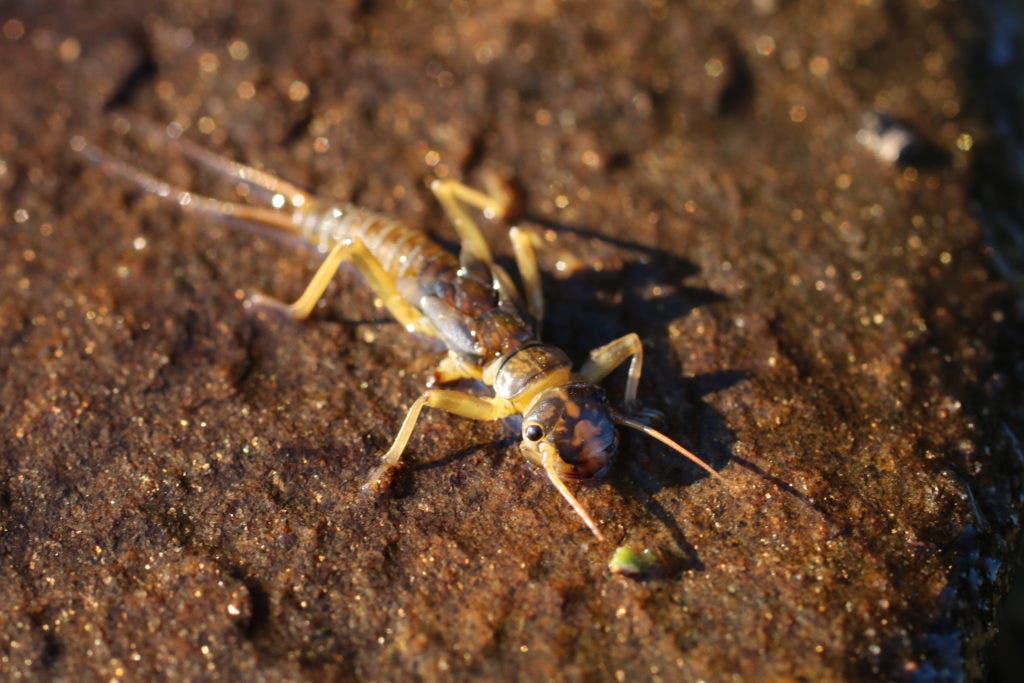 
I returned over several days with my camera and macro lens to get up close and personal. These investigations informed my fly tying for a while because, let’s face it, we were all tying a lot of flies during that period and doing not much else! I made a promise to myself to devote more focus and energy to trout fishing in the Tay in the future as there are some fabulous fish lurking in its pools which are seldom fished for.

As whispers of ‘lockdown easing’ began to spread however, my focus quickly turned to the true subject of my obsession - Atlantic salmon. I contacted Robert White, ghillie at Catholes, Benchil and Pitlochrie beats, and booked myself in for the first couple of days of the post-lockdown season, Friday 29th and Saturday 30th May. Those of you who have been tuning into my Farlows Facebook livestream interviews may remember Robert as my first guest. He has an almost unrivalled knowledge of the River Tay and looks after rods on three beautiful beats on the lower river in the Stanley area. If you’d like to watch our interview on ‘catch up’, visit our Facebook page and find it in our video library. 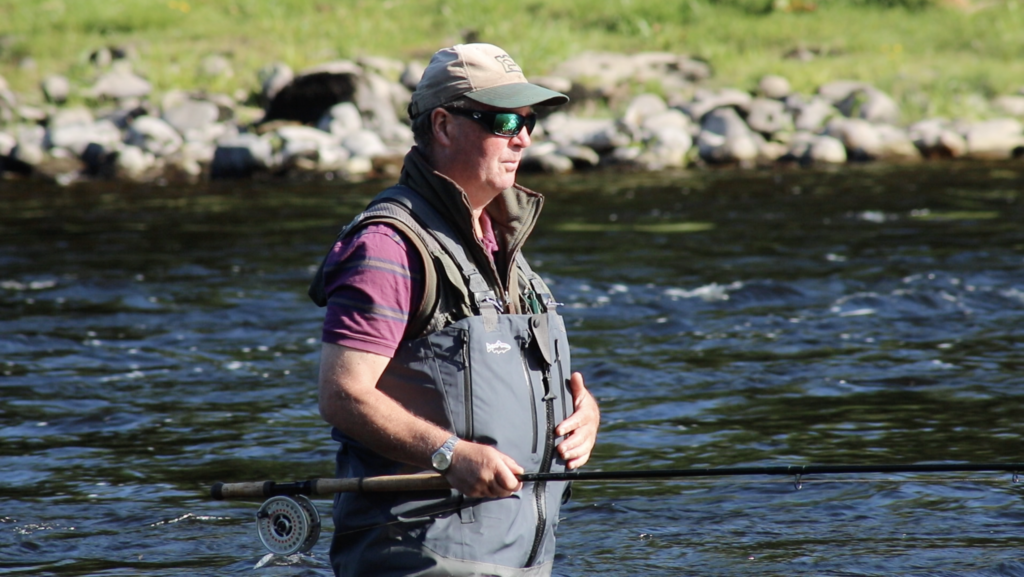 Robert White – having a post-lockdown cast through the Catholes Stream


Taking into account the river conditions, it seemed like the Benchil beat would offer the best chance at a bar of silver. I woke up early on the Friday, not quite believing that I was finally allowed into my waders again, and drove the short distance to the beat - 3.7 miles and comfortably within the Scottish government’s 5-mile recommendation!

Benchil’s pools looked tantalising and the thought that they hadn’t been touched in weeks was an exciting prospect. Alas, after a few hours in the morning with nothing to show for my efforts, I decided to head home during the sunniest time of the day and return later on in the evening when I would perhaps have a better chance. Reports of caught fish were coming in from further up the Tay system, including an amazing 16-fish day for the Portnacraig Pitlochry beat on the River Tummel. Clearly there had been some fish running hard upriver, sneaking past us on the lower beats. They were there… but how to find one?

When I returned that evening, I decided to shake things up a bit and tied on a Sunray Shadow and 10ft slow sink tip, planning to use a fast strip retrieve to provoke an aggressive response in a salmon or sea trout. My preferred setup for a river like the Tay is A 15ft rod (I love my LOOP S1), with a shooting head line system, particularly a ‘Scandi’ style line such as the RIO Scandi Shooting Head. This line shoots like a dream, especially when paired up with the RIO Connect Core Metered Shooting Line, a super slick and low-stretch running line that is nice to handle on the retrieve too. The nice thing about ‘Scandi’ style shooting heads is that they are far less ‘splashy’ than their Skagit-style cousins, so for casting smaller flies and lighter tips they give you a much more stealthy presentation. Save the Skagits for those heavy high-water tubes. 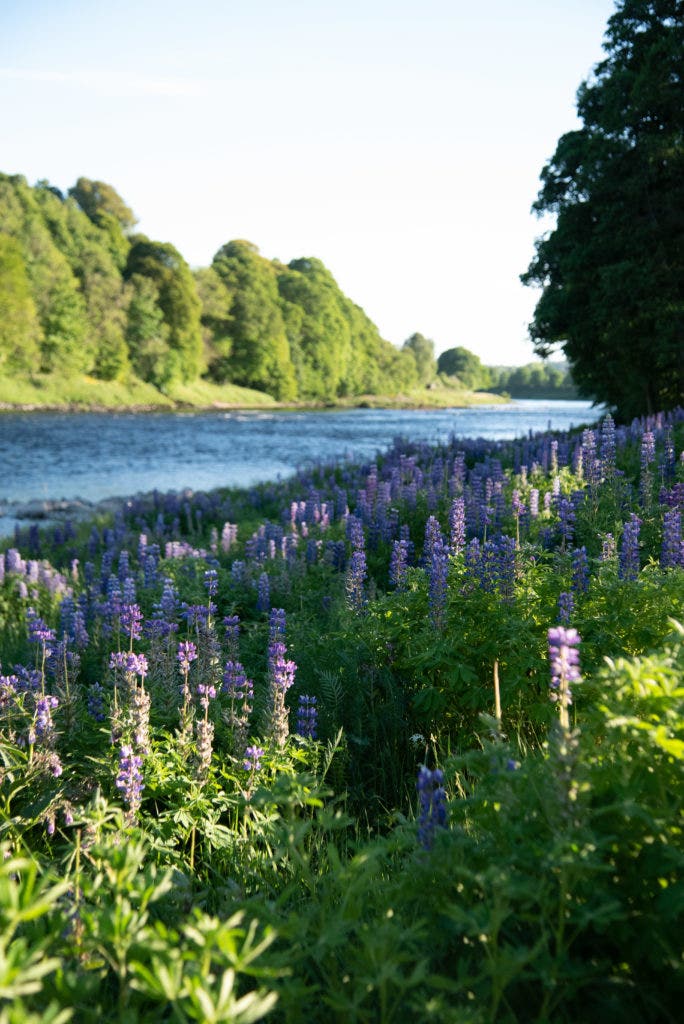 A view down the Long Shot Pool, with lupins blooming


I entered at the neck of the Long Shot Pool as the light began to fade and after a few casts I’d had a good solid take on the Sunray - a fish that turned out to be a rather fine specimen of a brown trout, not the main target but a lovely prize nonetheless. My efforts for the rest of that session were fruitless, but the river felt ‘fishier’ at that time of the day so I decided I’d take a similar approach the following day.

Saturday went by with a BBQ lunch in the sun and it was after 8pm before I was back on the river with a salmon fishing rod in my hands. After the sweltering 27C daytime heat, I felt that my efforts would be best focused on the cooler part of the evening once the sun had tucked itself behind the trees on the bank.

I took off the Sunray Shadow and tied on a Cascade Shrimp, in fact the very fly that I had tied on a Farlows Facebook Live fly tying session! Again, head over to our Facebook video library to follow along and learn how to tie your own. 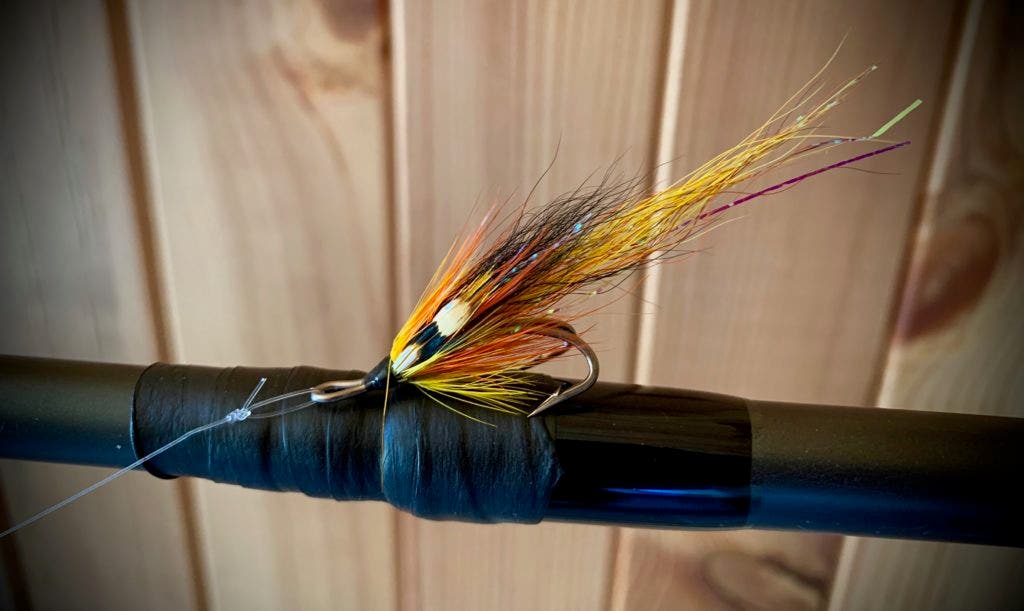 A Cascade, tied during one of our Facebook live sessions


With no boats on the beat at present (due to social distancing) and the high water level, the Long Shot pool on Benchil requires a long cast to reach the stream on the left bank. You simply wouldn’t reach it without a good shooting head system and some confident deep wading!

Imparting a figure-of-eight retrieve to my Cascade as it was swinging through the stream, the fly had come just to the edge of the main area of current when everything locked up and a fish thumped the fly before turning and powering off down the pool - that’s why I love the RIO Connect Core Shooting Line - instant and solid hit detection! It had been a long wait but finally my rod was bent over and my trusty LOOP Classic reel was screaming its head off - first salmon on! 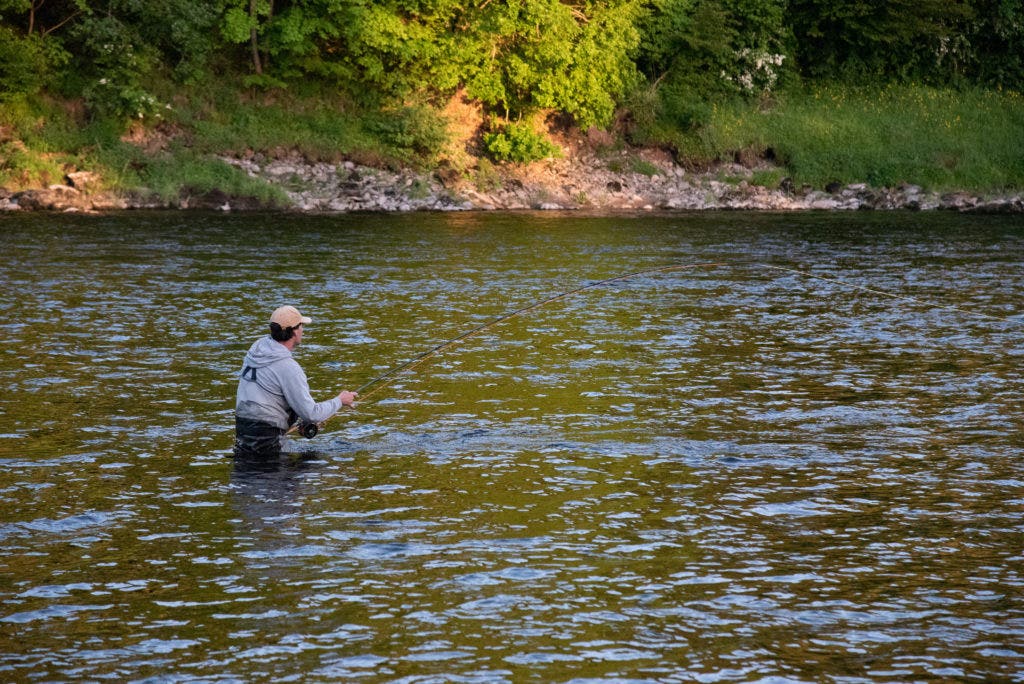 
I played the fish hard, and carefully made my way back to shore. I had found a convenient little sandy beach which would make a perfect landing spot and, when the fish was ready, gently slid it onto the sand and moved in to grip it by the wrist of the tail - salmon officially caught! The fish, a lovely, deep, silver Tay salmon with shoulders like a bodybuilder, was hooked perfectly in the scissors and easily unhooked whilst I kept it in the shallows. 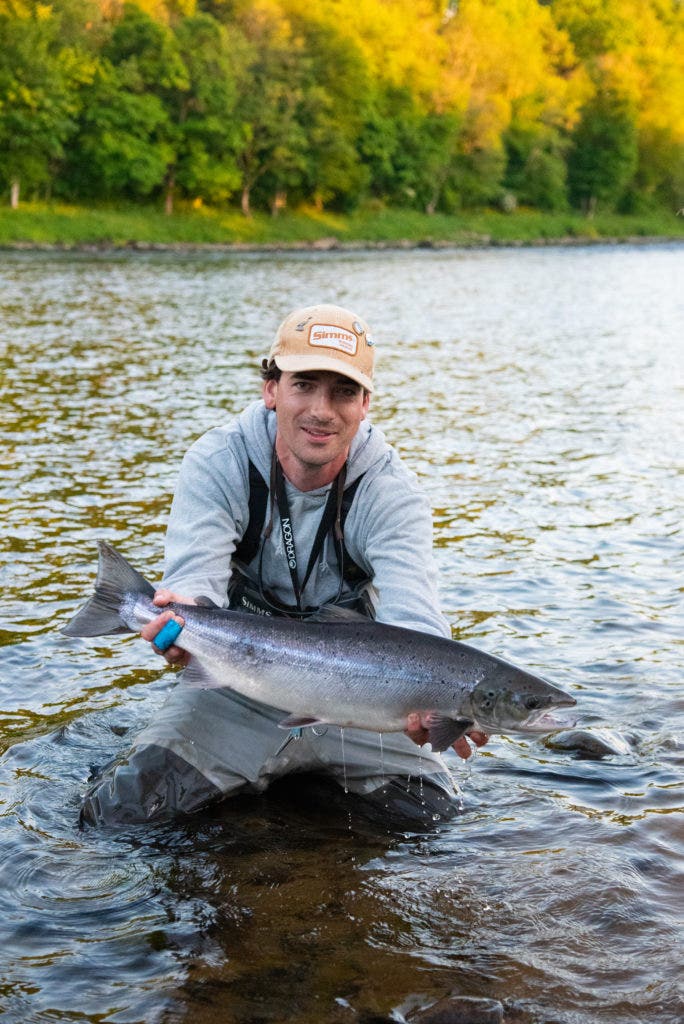 Shoulders like a bodybuilder... Image courtesy of James Muir - jamesmuirphoto.com


This was a great moment to practice good fish handling and there was no need to take the fish onto dry land. I recently wrote a salmon handling guide to help us all improve our salmon catch-and-release technique. Good fish handling is something I’m really passionate about promoting so remember to #keepemwet and get down into the water with your fish for a healthy release. After a quick couple of snaps, the fish swam off to continue its migration upstream - job done! 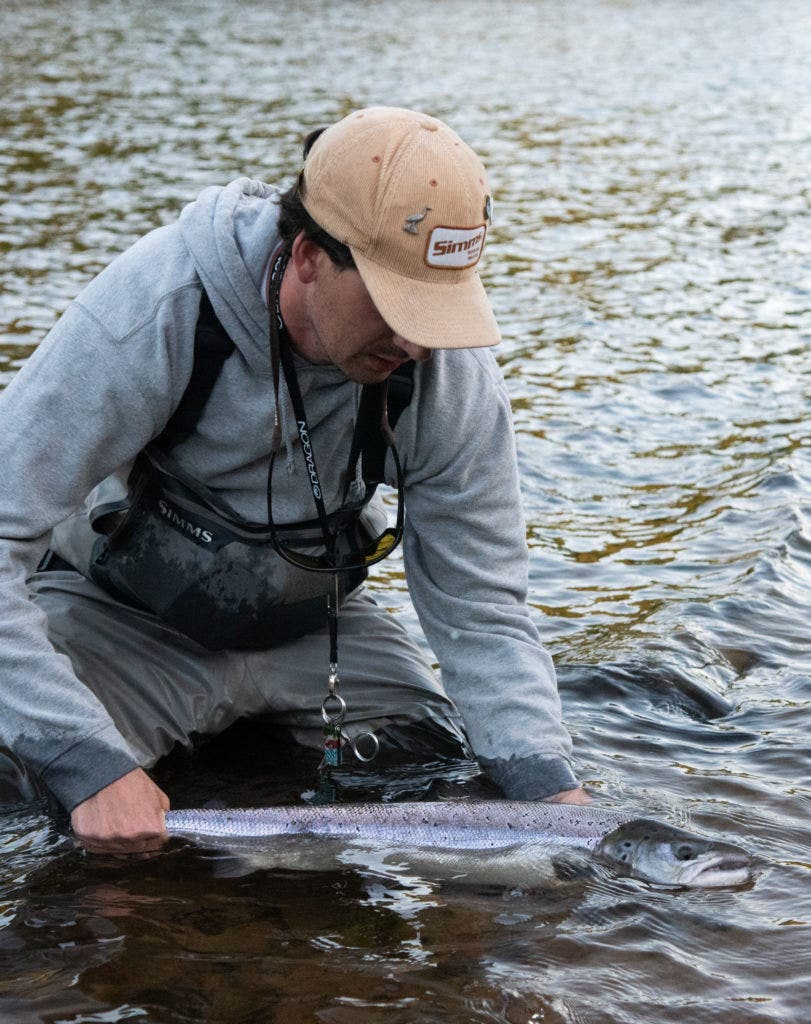 Travel restrictions are still in place for UK residents so make sure you adhere to the latest guidance on recommended travel distances. If you’re local to the Tay, I thoroughly recommend booking a day on Benchil this season with Robert White - you can contact him directly at robert.salmonfishing@gmail.com, call him on 07979 528134 or book through FishPal. With rods available for just £50 + VAT throughout the month of June, it’s well worth a go - you might just connect with a Tay salmon of your own.
1 year ago