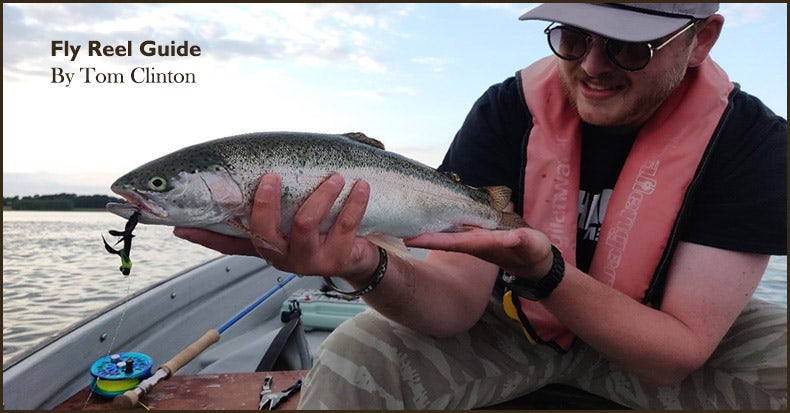 To make things as straightforward as possible, I have divided the process into six categories of consideration (section 5 can be ignored if you aren’t a ‘tackle tart’ like me!):

First of all, you should consider the material from which your new reel is made. These days we tend to only encounter three different materials in widespread use. These are plastic, die-cast aluminium and machined aluminium (or some combination of both, which we’ll focus on in section 3).

Plastic is light, inexpensive to produce and, therefore, cheap to replace. It has low impact resistance and is prone to wearing over time and warping when under extreme stress. Plastic reels should really only be considered by freshwater anglers as the chemical impact of saltwater degrades the material. Cheap plastic reels are fine for anglers on a budget, but if you’re after longevity then it really is worth spending the extra money on a quality aluminium reel.

Reels made from die-cast aluminium should not be confused with those made from machined aluminium. For a reel to be die-cast, molten aluminium is poured into a mould produced by its designer. Often there are telltale moulding marks on die-cast aluminium reels once they’ve been made, though these tend to be purely cosmetic. They are more expensive than plastic reels but less so than machined ones. Die-cast reels are more impact resistant than plastic, but have nowhere near the structural integrity of machined aluminium. Again, one should avoid using die-cast reels in saltwater as this form of aluminium cannot be anodised, only powder-coated or painted.

Machined aluminium reels are the choice of most discerning fly anglers. The construction of machined reels involves a solid block of bar-stock aluminium (often aerospace grade) being sculpted away by CNC machines to tolerances of thousands of an inch. As the chemical construction of the metal isn’t altered during the manufacturing process, the molecular strength of the aluminium is not compromised, thus producing the highest level of durability. The best machined reels are also anodised (chemically coated to resist scratching and damage from salt water). Colours can be altered during the anodisation process to give a more jazzy finish many reels (which I’ll touch on in section 5).

It is worth noting, no matter the quality or level of your fly reel, that if you use it in saltwater you MUST rinse it in fresh water afterwards, or be prepared to face the consequences!

Once you have decided on the material for your new reel and have a ballpark budget in mind, you need to consider which style of arbor you would like (or need). There are really only two choices here (although a third, the mid arbor, appears occasionally and more for choice than necessity).

A standard arbor fly reel is the more traditional option and this is an arbor which is small in diameter and holds a large amount of backing (it is most commonly seen on some of the classics from Hardy and Orvis). Standard arbor reels are generally compact and lightweight and are therefore often favoured by lighter line anglers.

The main issue with a standard arbor design is that the backing and fly line are stored in tight coils, increasing in tightness as you approach the backing knot. This causes problems for those who wish to cast further, or who prefer their line to be coil-free from the start. They also rarely have strong drag systems and their line retrieval speed is relatively low, which makes them a poor choice for those chasing harder-fighting fish.

The second option is a large arbor, and it was to combat the inherent issues with standard arbors that these were first designed. A large arbor reel has a wider drum around which the backing and fly line are stored. This means looser coils of fly line (combatting the line memory issue) and a far faster rate of line retrieval.

The main drawback to a large arbor reel, usually identified by those of a more traditional persuasion, is the physical size. Large arbor reels tend to be quite a bit bigger but, being more skeletal in design, they don’t tend to weigh any more than a standard arbor equivalent. This skeletal design also allows the space for modern high-torque disk drags (which we’ll cover in section 4), meaning you should always choose a large arbor reel if you plan on chasing more powerful species.

This is really only relevant if you are likely to use different lines during the course of a day’s fishing. These days, the majority of reels have an interchangeable spool construction and, in some cases, the process of switching between lines has been truly streamlined.

In the case of the avid stillwater angler (either for leisure, or in competition) it is worth considering a reel that incorporates quick-change plastic ‘cassettes’ into its main spool design (the Greys QRS for example). These spools are light, inexpensive and very easy to change quickly on the water. Of course, being plastic, they aren't very impact resistant and they don’t handle higher stresses very well, so for larger species the cassette spool isn't a great option. You should also never use plastic cassette reels in saltwater either, for the reasons mentioned above regarding plastic reels in general.

If you’re only likely to be using the one main line through your rod, then the standard spool style is what I would recommend.

The final key factor when choosing a new fly reel is the drag (or brake) system you require. There’s no hiding the fact that it’s absolutely awesome to have a fish peel line off your reel, but in reality that isn’t always going to be the case. The majority of UK trout anglers will likely never see their backing leave the rod tip, but if you chase salmon or other hard-hitting species then you’ll be thankful for a decent drag when you hook that fish of a lifetime.

The spring and pawl (sometimes referred to as the click and pawl or click-drag) design is a mechanical system based on the tensile strength and elasticity of one or two small springs. It has very little power and virtually no adjustment which makes it almost redundant for saltwater or big game anglers. It is, however, lightweight and unlikely to fail. Most UK freshwater anglers, even some of those chasing salmon, find the click and pawl more than adequate for their fishing.

The disc drag system involves two or more discs of specific materials sandwiched against each other, the friction between them providing a huge range of pressure adjustment. Disc drag reels come in two configurations - open or sealed:

Open Drag - An open reel will almost always use a cork disc juxtaposed with the back of the reel’s spool to generate the desired friction. As the name suggests, this format is open to the elements. This means that the reel is a lot simpler in construction and therefore very easy to maintain, but being open it requires more frequent servicing when exposed to salt water, sand and grit etc.

Sealed Drag - If you find this to be an issue, then the alternative is a sealed drag unit. The discs used in a sealed unit can be made from a number of different materials, including ceramic, carbon fibre, rulon and teflon, sealed inside an element-resistant unit. Whilst these units repel most dirt, dust and water, as mentioned above, after saltwater use it is still essential to rinse them out with fresh water. The problem with a sealed drag reel is that the majority of them are very difficult, nigh on impossible to work on without specialised tools and/or know-how. In fact, some reels’ warranties will be voided if you attempt to open them, so make sure you check the manufacturers’ paperwork before trying to DIY fix any problems that might arise.

Any customer chasing hard-fighting fish should always consider a disc drag reel of some kind.

Something of an afterthought, but a thought nonetheless! This is an decision which should be made last, though it’s very easy to get distracted from the technical details by certain sights and sounds. Many brands will offer different colour schemes for their reels, either in a limited run of factory-produced standardised colours (the Sage Spectrum Max for example), or in the case of brands like Abel and Tibor, whacky and wonderful colour schemes created through their anodisation process.

The sound of a reel also divides opinion, and generally the drag system of a reel will determine how loud or ‘clicky’ it is. Spring and pawl reels tend to have the loudest or meatiest clicks - favoured by salmon anglers that like to hear the reel scream as a fish tears off down the pool. Some of the big-game/saltwater reels on the market will be relatively (or completely) silent - the theory being that fewer moving parts equals less to go wrong.

Do you cast with your left hand or right? Should you therefore reel with your right hand or left? There isn’t a correct answer to this - it really comes down to personal preference or how you learnt/were taught. I know various people that will reel with their left hand for single-handed rods but switch to reeling with their right hand on double-handers. Thankfully, the vast majority of reels on the market today are convertible, though make sure to check before purchasing if you aren’t sure!