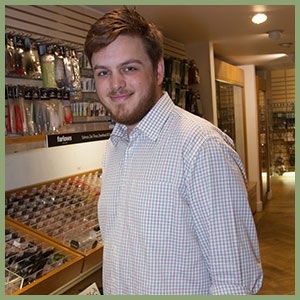 A regular customer at the store for some years, Tom joined the Farlows team in September 2017 and brought with him a wealth of retail and customer service experience, having managed a department in one of London’s leading suppliers of outdoor clothing and equipment for many years.

Although his family has a strong background in fly fishing (Tom first fished as a young boy in the company of his grandfather) Tom’s passion was always for mountain sports and snowboarding and he only ‘rediscovered’ fishing some five years ago when persuaded to accompany current Farlows Travel and Marketing Assistant, Jonathon Muir, on a trip.

Tom now spends as much spare time as he can fishing in Scotland but he also enjoys the English chalkstreams and smaller rivers too, with London’s River Wandle a recent discovery. With family ties to the Eastern Cape, Tom has fished for bass and trout in South Africa and enjoys shooting and stalking, both in Africa and Scotland. He has also spent time working on an equestrian ranch in the U.S.

Tom works with colleague, Jonathon Muir, to create high quality film footage of their fly fishing adventures (view video below) and we are looking forward to creating a series of Farlows fishing adventures with both of them in due course.

Tom’s immediate fishing ambitions centre around perfecting his Spey casting technique, because, having recently caught his very first salmon, he is keen to try for more.