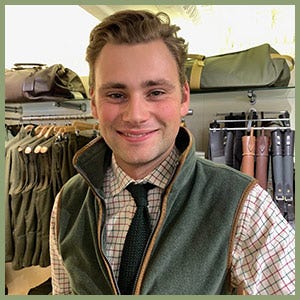 Jack was born in London, then moved to Kent, where he first started to fish in the company of his father, making trips both locally and to the near Continent.

His love of fishing developed, with sea fishing a particular passion, and he is a regular visitor to the Cornish coast where he thoroughly enjoys spending time lure fishing for bass.

It was while working at one of London’s leading suppliers of outdoor clothing and equipment that Jack met Tom Clinton, now Farlows Retail Manager, who introduced him to fly fishing, and he started to make regular visits to stillwaters such as Thornwood Springs and rivers such as his local River Wandle.

Jack joined the Farlows team in December 2017 and aspires to catch his first salmon and his first GT in the not–too–distant future. In addition to his fishing, Jack loves the outdoor life with shooting, walking and mountain biking all hobbies.