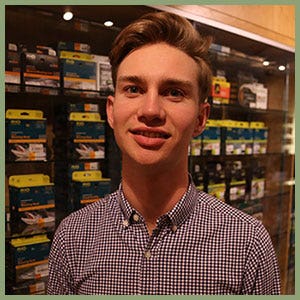 The newest recruit to the Farlows team is South African-born Ashton Pohl.

Growing up in Praetoria, Ashton was first introduced to fishing by a teacher when he was 13 or 14 years old and he quickly developed a passion for it, preferring the use of artificials over natural baits. It was this preference that led to his discovery of ‘Artlure’ fishing, a style popular in South Africa where artificial baits – be they lures or flies – are used to target fish.

Joining Classic Fishing Club in 2012, Ashton began to become more interested in the social and competitive side of fishing, particularly events that focused on the capture of multiple species, which allowed him to develop different techniques and employ different methods.

Excelling at Artlure, Ashton won provincial colours for four successive years and in his final junior year he was awarded full South African colours in 2017 when he represented his country in an international competition on the Okavango River in Namibia.

Once his junior years had finished Ashton moved to a provincial coaching role, helping to develop fishing and share his passion with other youngsters.

Having fished many South African rivers, and venues in Namibia, Botswana and Zimbabwe, Ashton moved to the UK where he has already started to get to grips with the rivers, including the Thames, Mole and Wandle.