Back in January at the start of the salmon fishing season, Farlows Assistant Manager Tom Clinton and I stood on the riverbank poised to make our first casts of the year. As is tradition, a speech was made, the salmon and river were toasted with malt whisky and the season was officially declared open. Those of you who read my 'Opening Day on the River Tay' blog may remember one of the key messages that I took away from that inspiring riverside pre-season speech, 'If you do one thing, take someone new fly fishing this year.' Challenge accepted.

Getting Someone New into Fly Fishing

With winter finally behind us and spring in the air, this was the perfect moment to live up to that task, I just needed to find a willing participant. My girlfriend Sophie had always expressed an interest in trying fly fishing and it was always my intention to take her out with me at some point, but as many of us know, choosing the right time of year and the right venue are crucial to giving newcomers an exciting first impression of our wonderful sport.

There's no point taking a first-timer nymph fishing for grayling in December or salmon fishing with a 15-foot fly fishing rod on a fast flowing Scottish river. Stillwater trout fishing is the perfect starting point and with weather conditions and temperatures improving this was the ideal time to organise a trip.

Our first port of call was to Farlows Sales Advisor and Instructor, Mark Windsor. Mark has fished all over the world from Deeside to down under and has helped countless newcomers find a way into the sport.

We arranged a lesson for Sophie at Syon Park Fishery in London and, with Mark's expert guidance, it wasn’t long before she was putting out nice, straight, tidy casts across the lake. I’d thoroughly recommend that all newcomers start with a casting lesson or two, whether it’s with one of the Farlows team or one of our colleagues over at the Sportfish Game Fishing Centre. Learning to cast is half the battle and a good instructor like Mark will make sure that novices get off to a flying start. 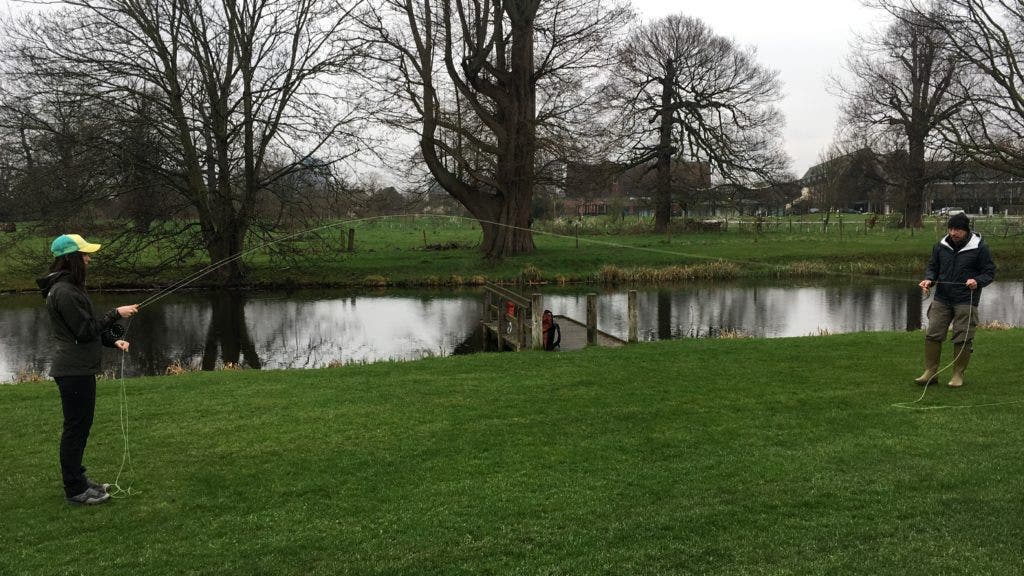 Sophie gets a lesson from Mark Windsor


After another practice session or two, it was time to plan our trip. This time Sophie would have a fly on the end of her leader, and hopefully a fish attached to it…

We were set for a gorgeous weekend of weather, up to twenty seven degrees in London on Saturday 21st April. I decided that we'd make a day trip of it and booked a boat for the two of us on Eyebrook Reservoir in Leicestershire.

Eyebrook is one of my favourite reservoirs, large enough that you have a sense of venturing into the wild each time you set out onto the 400-acre lake, yet still a manageable enough size to cover many areas of the lake in a single day from a drifting boat. The warming weather of the last few days should have encouraged good buzzer hatches across the lake, the perfect opportunity for Sophie to land her first fish.

After arriving at Eyebrook at the rather civilised time of 10am, we had a chat with the wardens to find out which flies and areas of the lake were producing fish. As I had predicted, the Eyebrook staff reported outstanding buzzer hatches and great numbers of trout being caught. As well as making sure Sophie bagged a fish or two, I would also be using the trip to test out some new fly fishing gear that we have here at Farlows.

I took with me a brand new 10' 7wt Sage X fly rod, paired up with a Hardy Ultralight ASR fly reel loaded with a RIO Gold floating line. At the business end I made up a 15ft leader of the new Fulling Mill Masterclass Fluorocarbon in 7.1lb breaking strain. My team of three flies consisted of two black epoxy buzzers and a Diawl Bach on the top dropper.

I also set Sophie up with a 10' 7wt outfit, floating line, 8.2lb RIO Powerflex Tapered Leader going down to the same 7.1lb fluorocarbon tippet with a single black buzzer suspended about three feet under an indicator. This is a fantastic method for beginners as it keeps the fly at the correct depth, while also providing a handy visual aid in the form of the indicator.

Once tackled up, we set off in our boat up to the area of the reservoir known as Norris Dyke. A gentle wind was blowing from the east, creating a perfect buzzer-fishing ripple across the surface of the water. We figured any food items caught in the surface film would be blown over to the western shore of the reservoir and we hoped that some hungry trout wouldn’t be far behind.

It wasn't long before I had our first fish of the day, a lovely, bright rainbow of about 2lb. It's always great to bag the first fish of the day, it proves you’re doing something right! Just as I was returning it, I looked to my right and Sophie's line shot out of her rod. Fish on! The fish tore off on a powerful run before Sophie got it under control and guided it towards the net, masterfully remembering everything she had learned in her lesson with Mark. She was over the moon with her first ever fly-caught trout and the day was already a huge success. Mission accomplished. 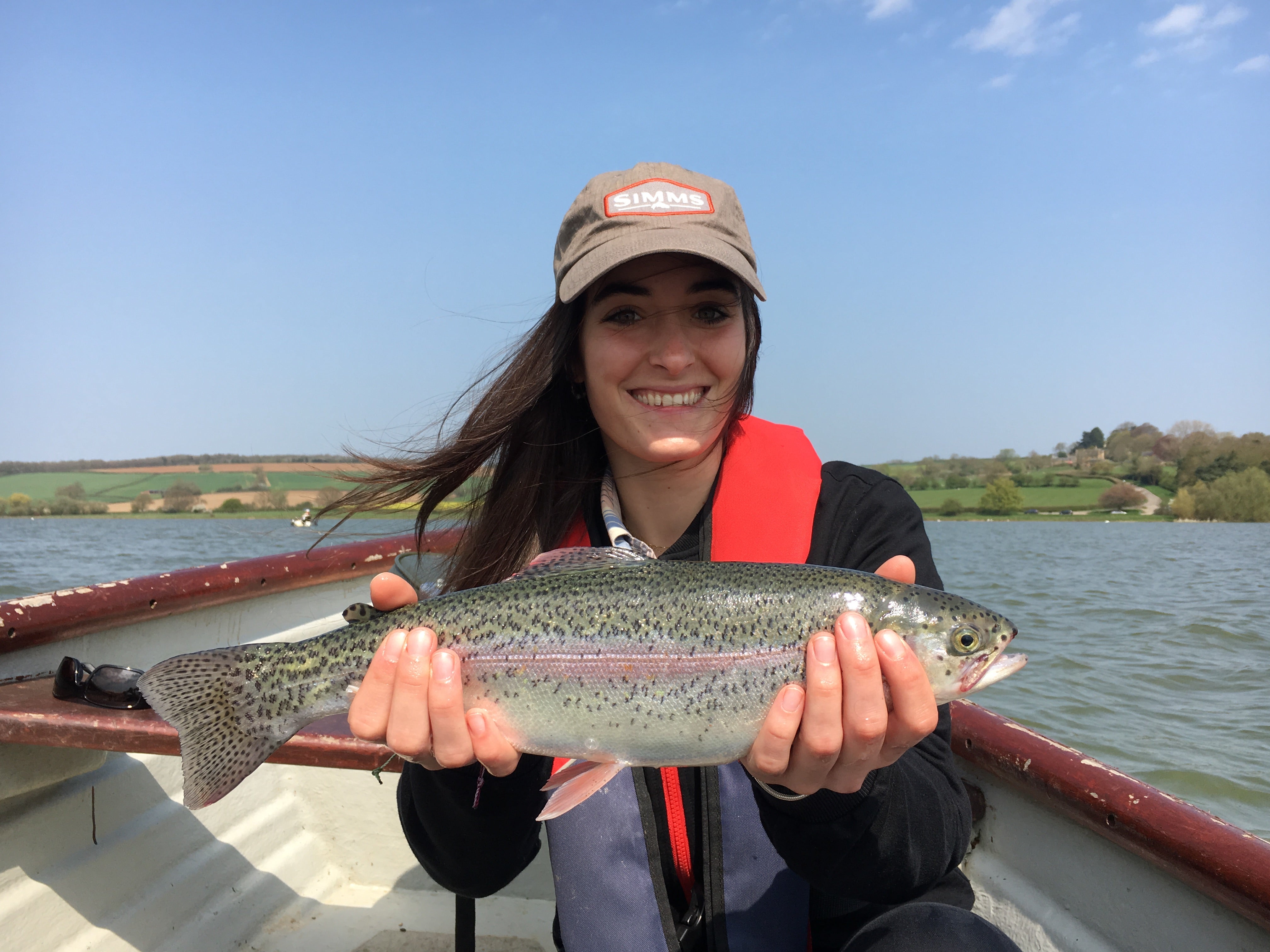 
To say Eyebrook was on top form would be an understatement. As takes dried up in one area of the lake, we relocated ourselves and found more fish eagerly taking buzzers in the top few feet of water. In a large reservoir, finding the fish is key. If you haven't had a take in 20 minutes, pull up the anchor and try a different spot.

After lunchtime we headed down to Mucky Bay and found what must have been buzzer-heaven. As a few clouds rolled in across the sky, hiding the bright sunlight, the surface of the lake came alive with fish sipping down buzzers and rolling tantalisingly in the surface. Sophie hooked and lost a couple of fish but then redeemed herself by landing a further three, taking her tally to four – not bad for a first-timer! I'd chalked up about a dozen rainbow trout, but who really cares about the numbers when the fishing is this good?

The Sage X was an absolute joy to use and is by far the best 7wt rod I have ever had the pleasure of fishing with. It feels light and comfortable in the hand but packs a seriously powerful punch when you need to send out a long cast, at no point feeling like the rod will collapse on you mid-cast. The fast action and quick tip recovery meant I could lift my line off the water, change direction and cast with remarkable accuracy to intercept a rising fish. I honestly can’t fault it, it's probably the best reservoir rod you will ever own. 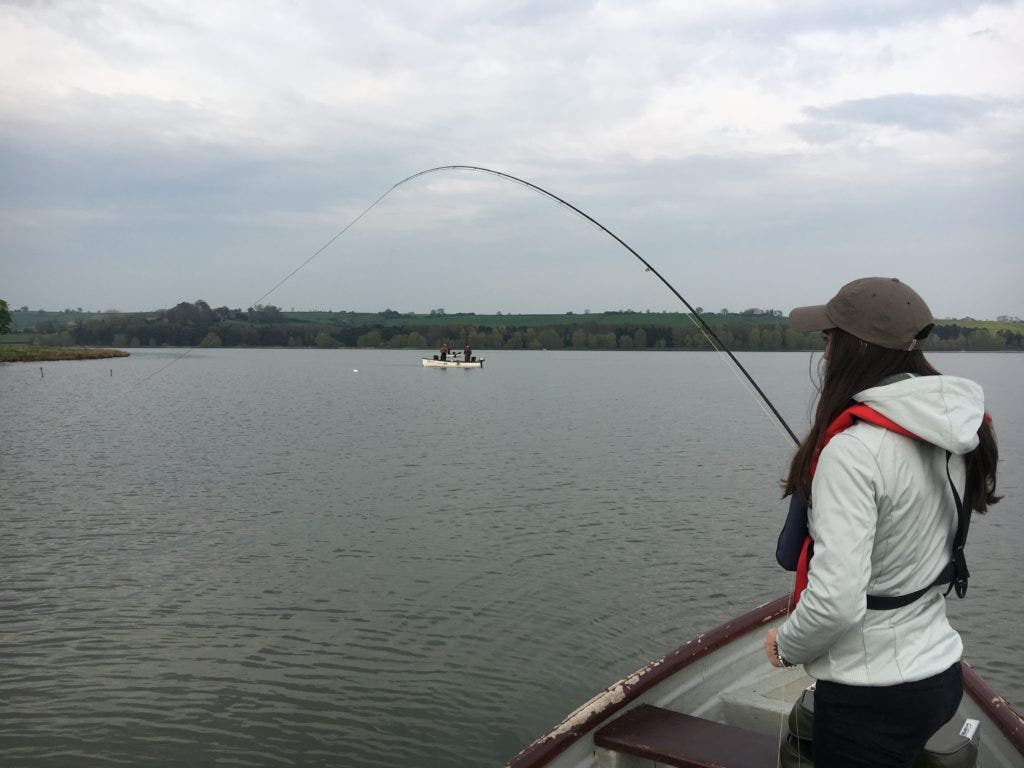 
By now it was about 5:45pm and I declared to Sophie that we would each have three 'last casts' before heading home. My second 'last cast' resulted in a fish hooked and lost close to the boat. Not to worry, I was content with a fantastic day's fishing and started to get ready to pack up. However, my now expert and somewhat cocky boat partner reminded me that I still had one cast remaining from my allocated 'last three'.

A Pleasant Surprise to End the Day

I sent out my team of buzzers one final time and proceeded to retrieve with a slow figure of eight. Not long after starting the retrieve the line went solid, ‘stuck on the bottom’, I thought. It was only then that the bottom started moving. This was clearly a bigger fish than the 2lb rainbows we had been pulling in all day, but what was it? A big grown-on brown trout perhaps?

As I brought the fish closer to the boat all was revealed when the prehistoric head of Esox lucius (that’s pike to you and me) came bursting angrily out of the water, not too happy to be attached to the end of my line. It was at that moment that I remembered light fluorocarbon leader and pike teeth don’t tend to mix too well together.

Somehow the fishing gods looked down on us kindly and, after a struggle to control the fish, we had it in the net. All twelve pounds of it. The pike had taken a small size 10 black buzzer and had fortunately not bitten through my leader! I think it's safe to say Fulling Mill's Masterclass Fluorocarbon is definitely up to the task, though I wouldn’t normally recommend 7lb 3X tippet for pike! 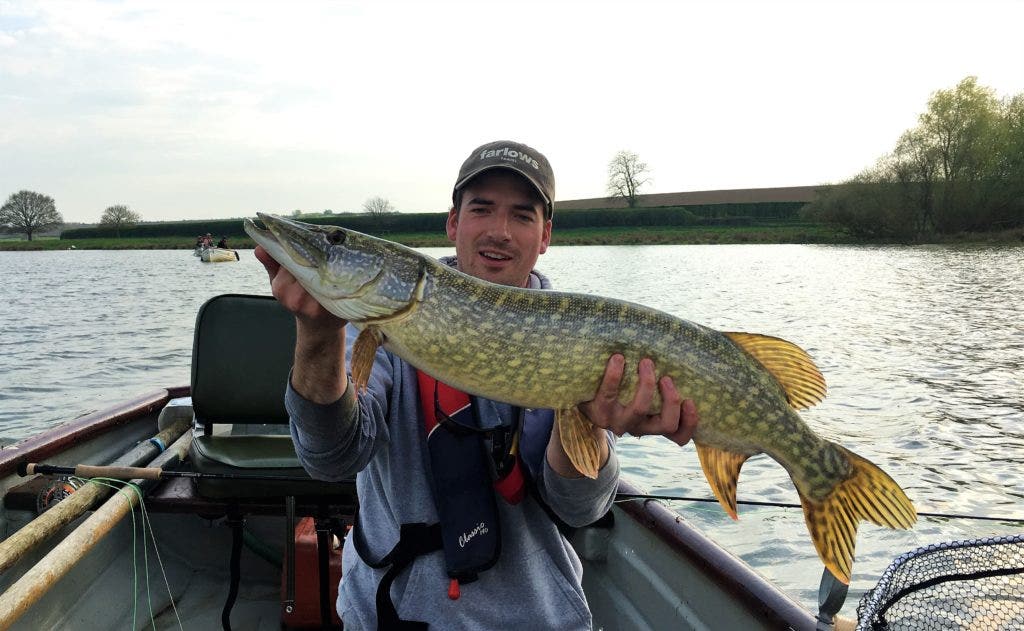 It was a wonderfully unexpected way to end the day


It was a wonderfully unexpected way to end the day, and most importantly, a newcomer to the sport was well and truly hooked. This is a great time of year to get out and explore our reservoirs, so why not take a rookie along with you? They may just bring you some beginner's luck…
3 years ago