Whenever I am asked about my favourite species of fish, venue or style of fly fishing, I never manage to give the same answer twice, dodging a full and in-depth response with “my favourite is the one I am enjoying fishing for at the time!”  Even so, the thought of sea trout fishing, especially at night, is never far from my mind and, if forced to compile a list, I reckon chasing those lively bars of silver would rank within my top five.

However, a full-time job in London, a young family at home and all the other modern day-to-day commitments expected of a middle-aged man have curtailed my nocturnal visits to the river compared to when I was in my 20s and just a few hours of sleep would do. In those days, the adrenalin rush would keep me going during the hours when most ‘normal people’ were at slumber. 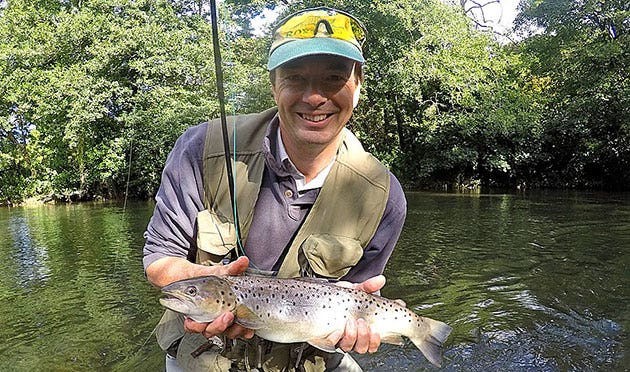 So, what to do if you hanker after a sea-run brown trout but cannot manage, or perhaps cannot be bothered, to stumble around in the gloaming? Fish for a sea trout by daylight instead!  Not so many years ago I would have brushed off this statement with a “Paff!” while reaching for my head torch with a knowing nod.  That was until the day my large, colourful dry fly disappeared, signalling a take to the nymph swimming below. My strike was met with unexpected resistance and an ocean-polished trout made music with my reel the like of which I had never experienced before.  I was attached to a daytime sea trout, but was this a one off - a fluke - or was it possible the text books were wrong and you could target this exciting species before the bats appeared?  Having guided several clients to daytime success, so that they could return in time for supper, I believe the answer is a resounding ‘yes – you can!’

No matter if you are fishing Testwood or the Taw, it is wise to be on the look out for surface feeders. Smaller juvenile fish most definitely take off the top (more of this later) and I have seen fish of several pounds rise to a dry too, most notably mayflies.

Theories as to why they exhibit this behaviour abound through the piscatorial world, providing much thought provoking debate, but the idea that a seafaring trout might take on extra sustenance, to support its visit to freshwater, seems entirely plausible.

Approach these fish just as you would any big, astute brown trout. Wade cautiously (when required) and be prepared to fish a long leader such as the Hardy Copolymer Precision Tapered Leaders in 12’, with a breaking strain of between 6 to 8lb.

It is surprising what can be caught during high, coloured water; conditions which may send most rods seeking a well-stocked bar.  Granted, targeting migratory species in a chocolate river may not be quite so appealing as the oily malt whisky shade we crave, but where sea trout are present the sediment-dyed water will act like a curtain, shutting out light, supressing their caution and making them more prone to attack anything which might cause irritation.

Just a few seasons ago a friend of mine landed a large double figure sea trout just after a heavy spate which slammed into his Red Snaelda Tube Fly so hard that it closed one of the hooks protruding from the back, fortunately being a Loop Double the other stayed put and Andrew (a night sea trout stalwart) banked his personal best sea run - during the day!

Now this might seem like complete madness: to fish for a species that is often described as elusive by locating and then casting directly to them, during the day. But it is possible. The light needs to be right, high quality polarised sunglasses, such as Costas, are a must and, above all, be prepared to adopt a heron-like stance for hours at a time, in fact, try not to breath too much!

My favourite target locations are tight to the river bank, preferably with an undercut and a nice channel for the fish to snuggle down in.  Shade will also help a great deal but remember that you will also need enough light to be able to spot a potential target.  Lifting nymphs in an induced take style, just as if fishing for brown trout, is highly successful, especially when several fish are grouped together and, as per my first ever ‘accidental’ sea trout, using an indicator can help to register takes.

Try a big dry fly or the New Zealand strike indicator tool set which will support a heavy nymph with ease.  And what do I recommend you flicker past the nose of a daytime sea trout?  Without doubt it seems to be the Fulling Mill Peeping Caddis Jig in #12 which drives them crazy, they just cannot resist the subtle hints of flash in the crystal hair tail.

This can be an incredibly successful daytime sea trout fishing method and salmon also fall for these highly mobile patterns, more usually associated with stillwater rainbow trout.  Not to be mistaken for the traditional Waddington style snakes, my favourite is the Fulling Mill Black Snake BC Barbless sporting a set of bead chain eyes.

Stalking sea trout, as per method three above, can be undertaken with rods as light as a five line but when pulling Snakes, I like something a little more powerful such as the Sage X rod in 9’6” #7, which is light enough to enjoy delicate presentation but with enough backbone to stop an angry sea trout that has just slammed into a high-speed lure.

My usual go to line is an Intermediate such as the RIO Aqualux attached to a Seaguar Fluorocarbon of 11.6lb which is cast into deep, slow moving, shaded pools (and glides) which may not possess sufficient speed to swing the fly in a traditional downstream and across manner.  Be prepared to lose some tackle because the more risks you take fishing into snag ridden pools the better chance you have of connecting with some daytime silver. 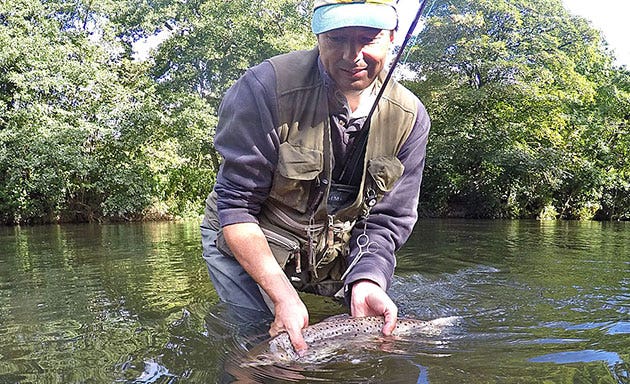 As previously alluded to (see point one above), sea trout can, and will, sometimes take dry flies, as if they had never left their freshwater home, especially the smaller Finnock, or ‘School Peal’ as we call them here in Devon. I first came across a group of fish displaying this behaviour one September many years ago while guiding on the River Mole, a tributary of the Taw which flows from Dartmoor to Barnstaple.

Creeping slowly upriver with my client we witnessed such regular rises that at any moment we expected to see a massive shoal of unsuspecting wild trout which, for some reason, had gathered for a surface feeding frenzy.  Instead it became clear that the fish responsible were juvenile sea trout, criss-crossing past one another slurping whatever bugs they could find.

With shaking hands, I quickly tied a Black Klinkhammer to my guest’s leader and with pin point accuracy he cast to the first rise, the second and then the third, but without a single take.  A dozen more casts were infuriatingly rejected when I suddenly realised what was wrong.  By the time the dry fly had alighted the fish to which it had been cast was already turning away and looking for something else to eat.  Quite unlike their brown trout brothers and sisters these fish were cruising about, looking for food, rather than maintaining station and waiting for it to come to them.

A sultry, slow pool requiring little in the way of retrieve suggested a new course of action and so a cast was made and then just left slowly meandering downstream, through the fish, rather than attempting to target individuals.  This tactic resulted in electrifying visual sport as a fish fell for the trap and gulped down the dry.  Several more fish succumbed before the pool spooked but by this time my client was beaming, having enjoyed some great fishing with several Peal of a pound all testing his 9’ #4 rod and light tippet.

There is no doubt that sea trout fishing during the hours of darkness is incredibly exciting but if the unsociable hours dictate otherwise please do try some of the daytime methods above.  Despite the misguided belief that this special fish is exclusively a creature of the night I can confidently declare that forgetting to pack spare batteries need never again be quite so disastrous! 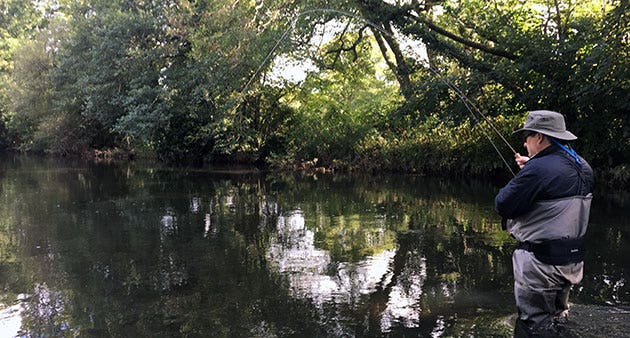 Did you like this post?
0
0
Comments
Ron Burton
Great tips. I have fished the torridgre for thirty years all night had fabulous sport but time has caught up with me, so it's day time salmon but when the river is to mucky for them the Seatrout can still be caught
Reply
Geoff Stephens
Great advice
Reply
Leave your comment
Search The Blog
Categories