The 2017 Charles Farlow Trophy has just been awarded, read all about the angler and fish that won it in our latest Farlows in the Field blog.

The inaugural Charles Farlow Trophy was won by Leominster, Hereford fisherman, Terry Ward, who captured a fish in March 2017 - conservatively estimated to weigh 35lb - from the Lower Winforton beat of the River Wye in Hereford.

Terry arrived on the beat to find conditions perfect, with the water clear and fining off after a period of spate and the weather overcast with a slight breeze.

Walking down the river Terry saw a good fish show in an area known as the ‘Cow Pond’ and cast a home-tied 1in conehead cascade on a size 6 owner treble to it – and hooked it straight away, whereupon he realised he didn’t have a net with him!

Frantic calls to the Sportfish store at Winforton, and then to his wife, resulted in the cavalry arriving in the shape of Colonel James Forrest, wielding a net to assist Terry  as he finally subdued the fish after a fierce 20-minute battle. Despite the net buckling under the weight of the fish it was safely banked.

The fish was recorded at a length of 46in with a girth of 27in before being released and swimming off strongly. Interestingly, it was exactly the same pool that produced the largest Wye salmon ever landed, a 59lb 5oz specimen, taken by Miss Doreen Davey, on March 13th, 1923. 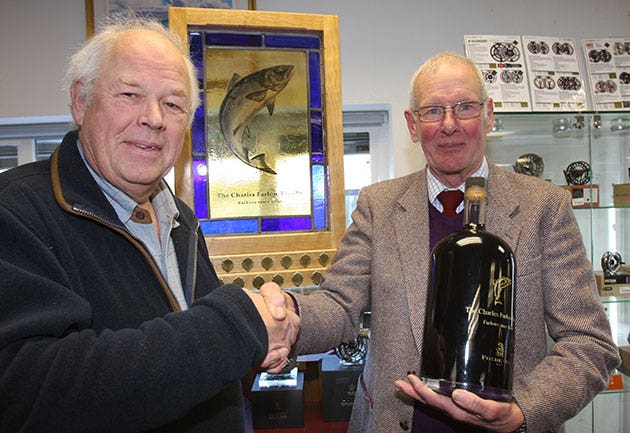