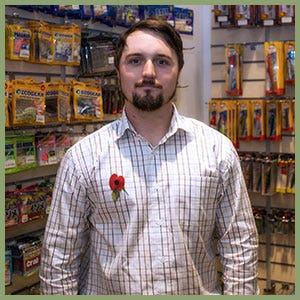 Another of Farlows newer generation of anglers Ben started working at Farlows in a part time capacity when he was a student back in October 2015, moving to a full time position in June 2016.

Growing up in Cornwall he started his fishing career aged seven or eight, fishing for mackerel around the local coast with his father before moving onto bass fishing with both lures and baits. He also started to target freshwater species too, particularly trout and predators.

Sea fishing was, and is, Ben’s first love and for the past ten years he has concentrated almost exclusively on lure fishing, which he finds a more fun and active way to fish, travelling light with a small amount of gear and staying mobile – the old adage of ‘being a hunter, not a trapper.’

As well as the more traditional methods of lure fishing with spinners, spoons and plugs he has also embraced the more recent developments in this fascinating branch of the sport with Light Rock Fishing (or LRF) a particular favourite.

His love of lure fishing has taken him to Cuba and he is heading to Oman in search of Giant Trevally in 2016, but he hasn’t entirely neglected his fly rod and still enjoys fishing for both pike and bass on the fly.

Now that he has finished his degree and taken full time ‘root’ in Farlows we expect to see and hear a lot more about Ben’s lure fishing exploits.