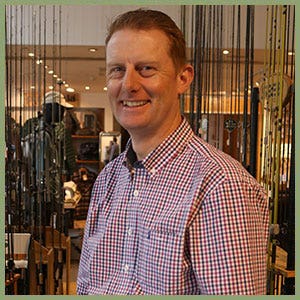 Growing up in a small Exmoor village the young Nick Hart was a fan of Jacques Cousteau and aspired to become a marine biologist from a very early age. This fascination with the underwater world inevitably led to exploration of his local river and although his family didn’t fish he persuaded his father to kit him out with a basic Woolworths starter kit and, after the capture of a wild brownie, an angler was born!

Taken under the wing of a local angler, Nick started to learn more about fly fishing and broadened his horizons by reading widely and visiting new venues, including reservoirs. By the age of nine he was totally obsessed and if he wasn’t at school every waking hour was spent fishing!

Despite being advised by his father that, “You will never make a living out of fishing.” Nick decided to pursue a career as a fly fishing instructor and after passing the Salmon & Trout Association’s National Instructors Certificate he was offered a job with world famous instructor Simon Gawesworth at his fly fishing school. When Simon moved to the U.S. to take up a role with RIO Nick had to decide whether to find a proper job or spend his days sharing his passion for fly fishing, with people who had proper jobs - it was a no-brainer!

With television work, numerous magazine features, his own book: The Essential Guide to Fly Fishing and indeed his own fishery, The Exe Valley Fishery, Nick is one of the most complete fly anglers in the UK today.

His passion for sharing his expertise and his deep love of the sport with anglers of all ages and abilities mark him out as a perfect partner for the Farlows philosophy.