Early Season Trout Fishing Up & Running on the River Usk

Early Season Trout Fishing Up & Running on the River Usk

If you’re anything like me then you’ll have suffered an impossibly frustrating winter season. Seemingly endless rain and nationwide flooding has made for an infuriating four months. My own opportunities to get out on the river were reduced to a single day fishing a coloured and rising Test at Christmas - with very modest success. For somebody who regards themselves as a genuine twelve months of the year river fly angler the 2013/14 grayling season will live long in my own memory as one of the worst.

However, they do say that absence makes the heart grow fonder. My absence of fly fishing only heightened my own anticipation for the coming trout season and as early March loomed large thoughts turned to targeting big early season wild brownies. 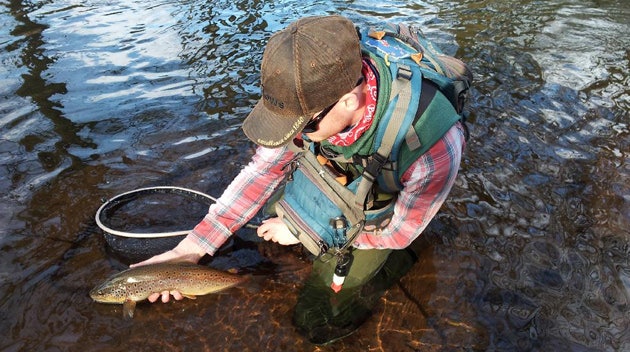 
Of course not all trout fishing rivers in the UK open at the start of March so one has to be diligent when approaching the challenge. Amongst the earliest rivers to open is the beautiful River Usk in South Wales, a river I know reasonably well in patches and one that is known to hold some particularly impressive but seldom seen wild brown trout. The Wye and Usk Foundation (WUF) manage the booking system on the Usk fantastically and offer great service as well as some of the best value fly fishing in the UK.

I chose to fish two beats in the upper reaches of the river, gambling that there could still be some really big fish there after spawning. Often these large fish move upstream into smaller water to spawn and drop back only when the water levels fall for the summer and because of this the early season represents one of the only opportunities to encounter truly large trout in smaller water.

One should approach the river with the expectation of using nymphs for the majority of the time. This gave me the chance to put my new Sage ESN fly rod 10’ 3# through its paces, as well as play around with some French and Czech leader set ups. I also took with me a selection of the new Fulling Mill Tactical flies which had arrived at the shop the morning before the trip. 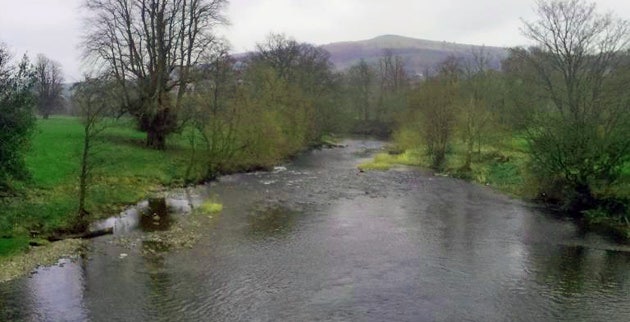 The River Usk in perfect condition!


One should never discount the dry fly earlier in the season, particularly when faced with warm, settled weather like I experienced in South Wales. One should be aware though that early season hatches can be over as soon as they start, often lasting no longer than a few minutes. In order to take advantage of the early hatches of large dark olive or march brown it is advisable to have a dry rod rigged up and ready to go as the time spent changing a nymph rig to a dry fly rig will see the angler miss the hatch.

The nymph rig itself is very simple. A nine metre tapered French Nymph leader with a spiral indicator, four feet of tippet to the top dropper, twelve inches to the middle dropper then twelve inches to the point fly. The clarity of the water was such that fine fluorocarbon was absolutely necessary; my favourite is still Frog Hair fluorocarbon in 4.4lb. The long French nymph leader means there is no casting or even any fly line involved in this style of fishing at all which drastically reduces the amount of drag on the flies as they progress through the pool. As such this gives perfect control and presentation and makes spotting and striking even the most delicate takes a simple task. Purists may argue whether this is true fly fishing, however, I like catching fish too much to worry about all of that!

Faced with different depths and pool structures there was an awful lot of chopping and changing of flies - this should always be the case. In the deeper pools and gutters the point fly was often a massive, weighty and fairly uncouth polyphitus nymph which was nothing more than a sacrifice to get two smaller and lighter nymphs down in to the fishing zone. In the shallower riffles it was possible to scale down and fish more traditional French Leader fly styles and this gave me further opportunity to test out some spider patterns I’ve been working on for a while.

The trout fishing was on the whole very good indeed. Fish were caught regularly over the two days, the largest being a lean but healthy 20” fish which gave an acrobatic display which was both terrific fun and terrifying. Eventually he came to the net and after a quick snap for the album he was released and swam right back to where he had taken the nymph not five minutes before - clearly a very hungry early season fish!

Later in the day another good fish of note was caught and released, this time a solid fish of 16” which was in fighting fit condition and gave the new rod a thorough workout. I must say I’m very impressed with the Sage ESN so far. Sage appear to have struck an excellent balance between the rod being fast enough to hit quick takes with and soft enough to not pull the hooks out of smaller fish - I’m yet to actually hook and lose a fish with this rod.

Another spring brownie is returned to the Usk!


The progressive angler will always be more successful during the early part of the season. Modern nymphing techniques are opening up pockets of water the just aren’t practicably possible with traditional down and across or even upstream nymph methods. The close control, precision and feel of the French leader is a real winner when fishing big heavy flies down deep and in truth I may not have caught anything on the Usk without having these techniques at my disposal.

All over the country now the river season is starting to open up and there may not be a better time all year to make contact with a large trout. By taking on the challenge, reading the speed and depth of the water in front of you and by being pro-active with changes of both flies and technique it is perfectly possible that your early season prize may just be the biggest fish you land all season!
8 years ago